Waves’ high flying token and stablecoin have crashed after peaking on March 31.

Waves, a Layer 1 blockchain known as ‘Russia’s Ethereum’, has suffered a reversal of fortune as accusations of Ponzi schemes and market manipulation fly in a wild week of action.

Sam Bankman-Fried, the CEO of crypto exchange FTX, got swept into the drama as one of Russia’s major crypto plays went sideways.

The project’s native token WAVES began to surge a few days after Russia invaded Ukraine in February. This led to speculation that Russians were using the platform to circumvent Western sanctions after several of the nation’s banks were cut off from the Swift messaging system.

This coincided with Neutrino USD losing its dollar peg as it briefly traded below $0.60 before rebounding. It was trading at $0.82 in the early morning UK time Tuesday.

Neutrino USD, or USDN, is an algorithmic stablecoin that is collateralized by WAVES tokens. In a way, it operates in a similar fashion to UST and LUNA, as USDN can be minted with and redeemed for WAVES.

USDN has a native staking yield that serves as its main source of demand and is the primary usecase on the Waves blockchain. Crucially, the staking yield is dependent on the price of WAVES, which determines a multiplier. So, staking rewards increase as the WAVES market cap trends higher, stoking more demand for USDN.

‘The Biggest Ponzi In Crypto’

On March 31, 0xHamz, a crypto investor with 16,000 followers on Twitter,  published a thread calling out Waves as “the biggest Ponzi in crypto.” They accused the Waves team of artificially engineering price spikes by buying WAVES tokens with funds borrowed on Vires Finance, the dominant lending protocol on Waves. 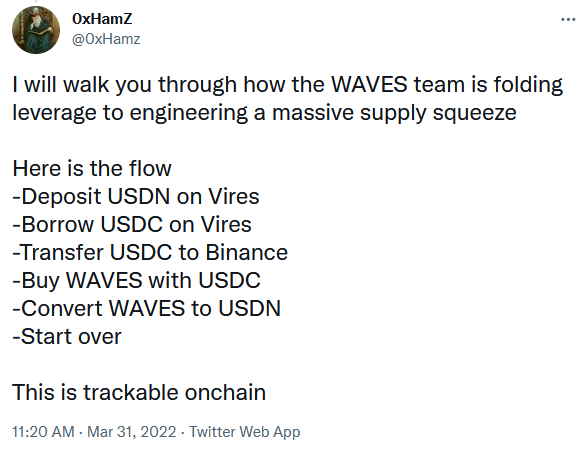 Such a scheme requires a steady supply of USDC and USDT available to be borrowed, which Vires was able to attract by offering above-market yields to lenders.

In the wake of these allegations, users began to withdraw their stablecoins from Vires, causing borrowing rates to spike to 80% APR and making it unfeasible to borrow.

USDN began to gradually depeg as users sought to exit by swapping into other stablecoins using Curve’s USDN pool.

Curve’s stableswap invariant is limiting the damage yet again as USDN continues to trade around 80 cents despite making up nearly 93% of pool assets.

“Get your popcorn ready: Alameda Research manipulates $waves price,” Ivanov tweeted. Ivanov alleged that Alameda took a short position in WAVES and organized a FUD (Fear, Uncertainty and Doubt) campaign to manipulate the token price in its favour.

Alameda founder Sam Bankman-Fried fired back and called the tweet an  “obv[ious] bullshit conspiracy theory” and CEO Sam Trabucco pointed to the funding rates for WAVES, hinting at the firm’s possible strategy.

With a lot of traders shorting WAVES on FTX, funding rates had dropped deeply into negative territory, meaning that traders were incentivized to open long positions. Had Alameda done so to capture the funding fees, they would naturally have hedged the position against adverse price movements by shorting WAVES on-chain.

A governance proposal has been introduced in the Vires forum, seeking to reduce the liquidation threshold for Waves and USDN borrowers to 0.1% and also limit borrowing rates to a maximum of 40%.

If passed, existing borrowers including the alleged Alameda wallet would be forced to close their positions or risk immediate liquidation. The majority of forum users seem to be against the proposal, on which voting begins today and runs for five days.

According to Twitter user lightcrypto, the wallet that drove the price up over the past month has been liquidating its WAVES tokens.

While the fallout from a potential USDN collapse is unlikely to greatly affect DeFi as a whole, some users like Jack Niewold are raising questions about what could happen if Terra’s UST was to face a similar situation, given its increasing integration across DeFi.

The whole episode serves as a reminder that all stablecoins are not created equal. It’s more important than ever for Defiers to know what they own before getting drawn in by lucrative headline yields.

Earn During The Bear

What Is Yearn Finance?