USDT Issuer Will Act On Specific Requests From Law Enforcement

One of the least trusted stablecoin behemoths has the pro-decentralization crowd cheering.

Tether, the company behind the USDT stablecoin, said on Aug. 24 that it will not freeze any addresses which hold its dollar-pegged asset until specifically asked to do so by law enforcement.

Tether stands in stark contrast to USDC issuer Centre, which froze 38 addresses on Aug. 8. This means that the USDC in those wallets, cannot be transferred. Centre’s move outraged the crypto community, which holds permissionless transactions — the ability to send money to anyone, anywhere, with any application — as one of its core values.

Tether said in its post that the company is in contact with key law enforcement officers almost daily and has not been asked to freeze any assets. The crypto community is generally applauding Tether for not, as many see it, preemptively taking a knee to U.S. law enforcement.

“Remember those who fight the toughest battle for you,” said well-respected Yearn Finance developer, banteg, on Twitter.

With a market capitalization of $67.6B, USDT is crypto’s largest stablecoin. USDC comes in second at $52.3B. 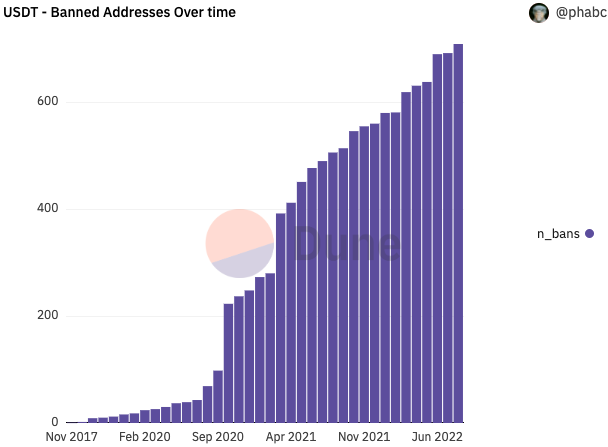 Tether has always dealt with swirling rumors about whether the company really has enough assets in its reserves to back its stablecoin. With its stance to hold off on freezing addresses, the company may have boosted its reputation, at least among the crypto diehards who see decentralization as a core tenet of open finance.

Of course, with over eight times more banned addresses than USDC, Tether may not be the champion of crypto that some are making the company out to be.