Get the 5-minute newsletter keeping 60K+ crypto innovators in the loop.

Having been some of the highest-performing assets in 2021, DeFi tokens experienced a sharp correction this week. The aggregate market crap in DeFi governance tokens managed to drop approximately 30% from $41 billion to $28 billion within three days.

Although the market has recovered significantly over the past 24 hours, DeFi and crypto broadly is going through the largest correction so far in 2021. This drop has coincided with a retracement with traditional markets, as well as high levels of short-term trading, and resulted in massive liquidations both in CeFi and DeFi.

At IntoTheBlock, we have been pointing to the increase in short-term activity as one of the key insights of the bull market.

The number of addresses holding Ethereum for under one month — classified by IntoTheBlock as traders — reached record highs in February. This metric points to high amounts of speculation and short-term trading taking place over the past few months based on blockchain data. We observe the same pattern in Bitcoin, Chainlink, Aave and Synthetix just to name a few.

The significant amount of short-term trading suggests a large number of traders have been chasing Bitcoin’s price trajectory. Moreover, while the number of addresses trading Ether grew by 7% in the last 30 days, the volume decreased by 12%, meaning that there was a capital outflow from this group despite the growth in the number of traders. A similar trend was observed following the DeFi Summer.

Perhaps unsurprisingly, crypto markets encountered billions worth of liquidations in the recent crash. 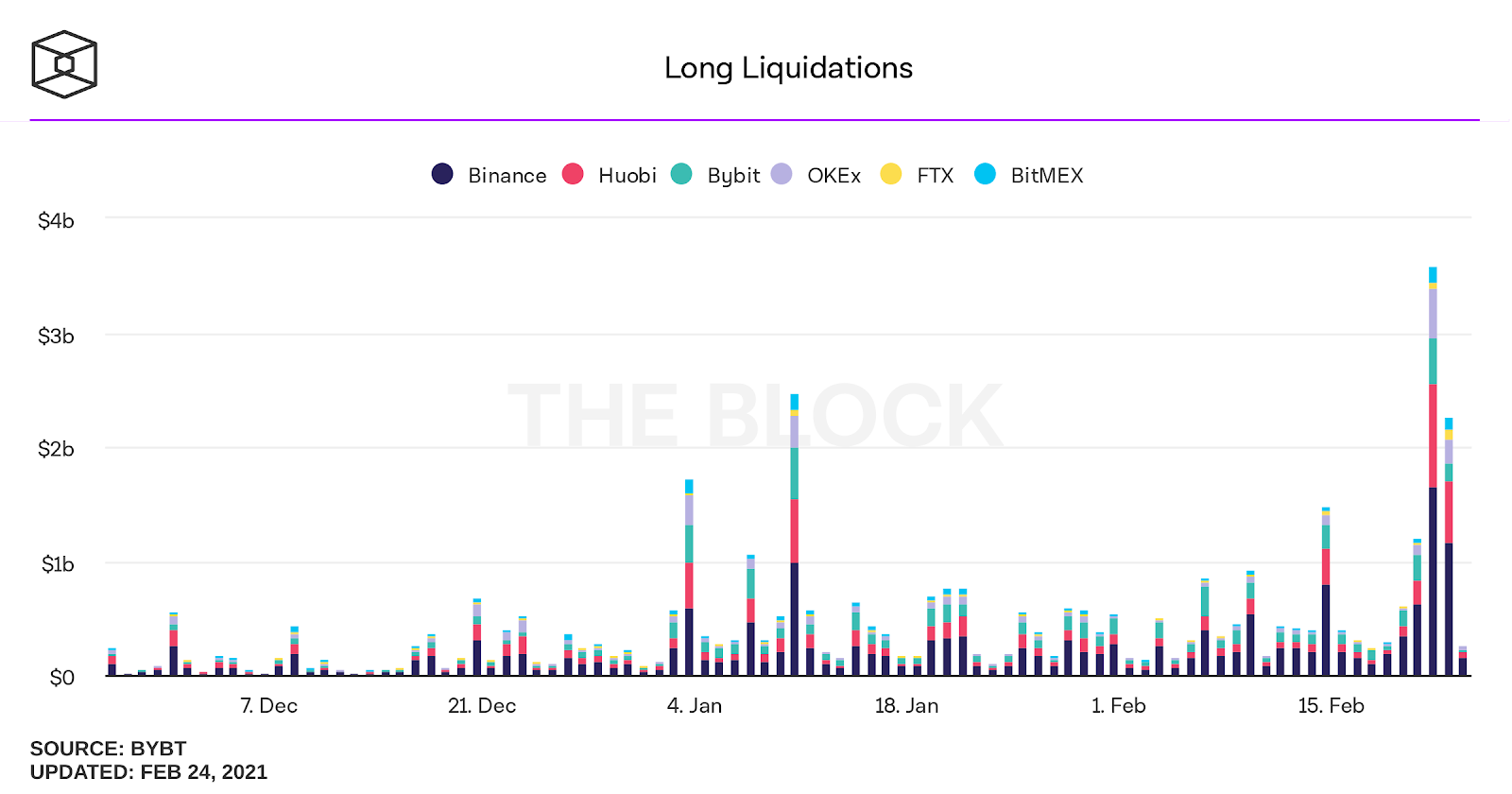 As of February 24 via TheBlock

The increase in liquidations point to more value being at stake in the recent crash, potentially due to higher leverage being taken from traders. (Unfortunately centralized exchanges do not publicly state how the leverage taken by its traders varies through time).

In decentralized finance (DeFi) we observe a similar trend. Liquidations in the lending protocol Compound reached the second highest ever on February 23.

As of February 24 through IntoTheBlock’s Compound Protocol Indicators

The $87.8 million worth of liquidations on Tuesday is more than had been liquidated the entire month. This further demonstrates the high leverage traders had been taking on prior to the crash.

While speculation is nothing new to crypto, it is worth highlighting the data pointing to increased short-term trading and recurring patterns. Overall, the current correction is “healthy” considering there had been signs of the market getting overheated.

It still may be too early to tell how long the correction will last, but fundamentals continue to improve with layer two solutions getting implemented and launching soon. This divergence between prices and fundamentals is another pattern that had previously occurred when DeFi tokens began to rebound in November.

Stay up-to-date with The Defiant Newsletter. We do the research for you.