It’s buy everything season in DeFi land. But while everything blows up, actual users are climbing at a slower pace.

Ethereum is at an all-time high of over $1,630, as is the DeFi Pulse Index, which tracks major DeFi token prices. Total value locked (TVL) in DeFi just climbed above $30B, also a record.

It’s not just prices and TVL. Decentralized exchange (DEX) volume rang in the new year by doubling to more than $50B in January.

DEX market leader Uniswap exemplified the trend as the automated market marker’s (AMM) volume doubled to $26B. Despite this jump, the number of transactions for the AMM have been relatively flat on the year.

As Ethereum also doubled in January and accounts for 42% of the $3.9B worth of liquidity on Uniswap, a potential conclusion from the contrast of two charts is that the increase in volume is mostly due to increases in the underlying value of the assets transacted, rather than increased usage.

The amount of Ether locked in DeFi, $7M, is approximately where it was at the beginning of January, corroborating the story that increased volume is mainly due to asset appreciation.

DeFi’s lending sector tells a similar story where outstanding loans from big three lending protocols, MakerDAO, Compound, and Aave, increased by 38% during January compared to a 15% jump in December. Meanwhile, the protocol’s tokens AAVE, COMP, and MKR’s prices, have soared 240, 145, and 153%, respectively on the month, 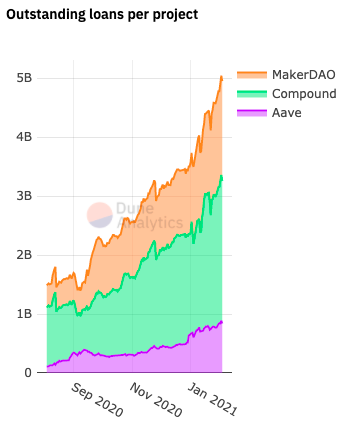 Again, that month-to-month acceleration contrasts with the more modest uptick of unique users.  Unique borrowers were mostly flat, while total DeFi addresses only increased by 13%, to 1.3M, in January.

Ethereum may be attracting new users, while those already involved and comfortable in the cryptocurrency’s ecosystem may be allocating more of their wealth towards DeFi.

A Google Trends dashboard contrasting “Ethereum” and “DeFi” shows interest in the former spiking while the latter has barely shown an uptick.

Ethereum’s spike in interest and price may not immediately be bringing new users to open finance, but the jumps validate the DeFi applications built on top of the network, perhaps encouraging OGs further allocate their wealth towards protocol tokens.

Plus, an increase in collateral’s value allows those with preexisting Ethereum locked in protocols like Maker, to withdraw more stablecoins to use within DeFi.